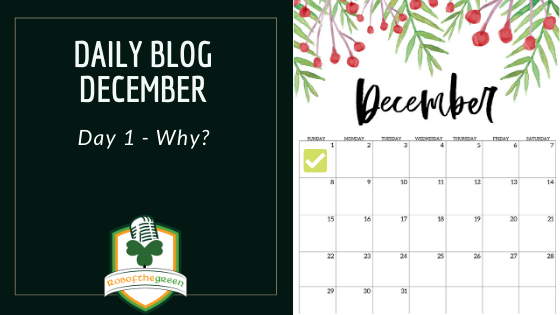 December 1, 2019 rob.odonohue Comments Off on Daily Blog December – Why?

A few months back, one of the guests on the podcast, a gentleman called Murray Newlands, told me his story. He wanted to forge a writing or blogging career, however he didn’t have a background in. So, he decided that he would post a blog (or two) every day for a year. That rolled onto two years. And continued. He realized for him to get recognised and become a known name in the blogging world, he would need to have something to point to. Makes sense, right? It worked out quite well for Murray. He’s gone on to publish books, work in jobs he’s dreamed of, relocate to the US, and continue to grow and develop. Check out the episode if you’d like to know more about it.

So why am I sharing this little story? I’m not planning on following the same path as Murray and go down the blogging route per say. That’s not my goal. But what did resonate with me from his words? The focus, deliberate practice, discipline and ability to set a big goal and execute against it jumped out. These are common themes from all the interviews I’ve done with folks that have gone on to be successful in their field. Hard work and self-belief win through. The message coming out is clear.

So, for this December, my monthly personal challenge is to write a short blog post every day in December. While it’s in part inspired by Murray, from other reading I’ve done by other bloggers and authors, it suggests commitment to writing over an extended period of time will bring some improvements in how one puts together words, and assembles ideas. Two areas I’m keen to improve upon. On top of that, a key piece of advice that also stands out from bloggers and writers is to publish regularly. That’s where you’ll learn faster and get more feedback (hopefully). Facing and getting over the fear of posting is something I can relate to when it comes to podcasting. It’s a different medium but a similar sense of initial excitement and concern when the content goes online.

In truth, I’ve been meaning to do a daily writing challenge for a while but have been putting it down the list. Finding an excuse not to. Now, with a successful No Coffee NOvember behind me, I figured that a coffee accompanied daily writing December will be more doable. So here goes.

For anyone that’s put blog posts out there and posts regularly, you’ll know that it can take a lot longer than you planned. Spell checking, reworking, adding links, adding in images, etc all takes time. Add to that your desire to put your best work out there, striving for perfection (PS it doesn’t exist), the hours can add up. So, I’ve set myself some rules for the work. These currently are:

Why do it? A few things jump up but mainly just to get better at writing in a short space of time(I’ve got 5mins 32seconds left for this piece) and get my main points across clearer. I’m guilty of writing too much so this is to practice writing almost too little. In addition to that, I hope to get more comfortable with just posting content. Doing it more frequently, similar to how I now feel about podcasting, will bring other unexpected benefits I’m sure. It’s really all about just committing to the process and seeing what emerges. So, I’m excited to follow the process.

If you’re reading this and are onboard with me for the 31 days, great. I’m going in with a similar mindset I have with the podcasting. Instead of ‘talk like nobody’s listening’, I’ll ‘write nobody’s reading’.

Worst case scenario? There isn’t really one I can’t think of right now. And I’ve got coffee back to help me through it. The learnings of the coffee free month is tomorrow’s topic.

Have you signed up to the RoboftheGreen Slack Community where we take on these monthly challenges and hold each other to account? It’s free, and lots of fun. Join up HERE. Invite a friend along too.