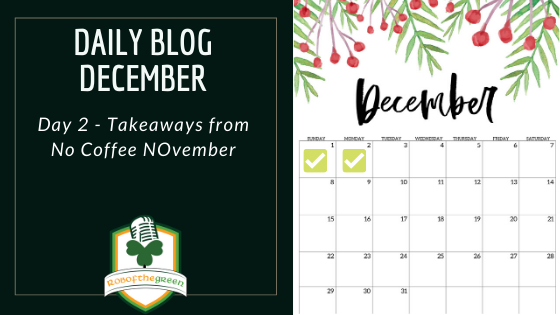 December 2, 2019 rob.odonohue Comments Off on Giving up something you like, for a while!

I had some ideas put down to start this piece off a little differently. I think it’s more appropriate to say it’s what is actually happening right now. It’s 5:10am and I’m drinking a double Nespresso (intensity 10) on Monday 2ndDecember. We’ve had a night of very little sleep here as a our little 11-and-a-half-month old boy has been a bit sicky over the weekend and temperature fluctuations overnight have meant very little sleep. For all of us. Poor little lad. He’s sleeping now but this pomodoro 25-minute effort might be cut short.

A month ago, I would have said the double shot of coffee would be all that might get me through this morning. That the caffeine would come to the rescue. But that’s one of the few interesting things I’ve learned from full 30 days without coffee. That, at least for me, it isn’t the saviour that I thought it was or meant to be. As I take another sip of this double though, it does taste good.

Today’s post is a bit of a lessons learned you might say. Some of the things I noticed from a self-imposed coffee ban for NOvember.  Here’s what stood out.

There are more to be added but in the interest of time (I’ve got 2 minutes left), I’ll leave it at that. A worthwhile experience. Probably not one I’ll do again to be fair. When it comes to coffee I mean. But at least I know I can do it. I just don’t know why I would!

Is there anything you think you couldn’t give up for a month? It might be worth giving it a go and see how you get on? Join up to the RotG Slack group if interested.