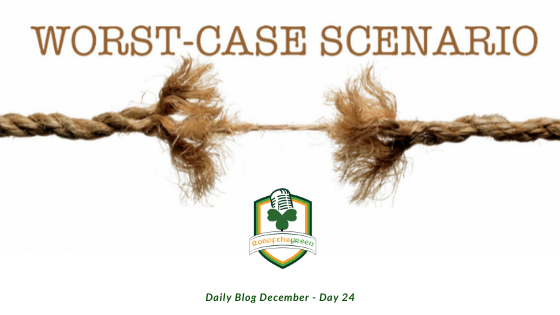 3 years ago, today (24th December 2016), I registered the domain www.robofthegreen.com. I remember very clearly going on to the domain registration site and paying something like €5 to park the domain. Not surprisingly, it was available. Looking back on it now, this simple task acted as the lead domino in what was to follow since with the podcast and content shared, including this blog post.

At that time, while the idea and high level plans for setting up a site and podcast had been in the works for a number of months, and some money had already been invested in some kit to get the ball rolling, it was all very much in my head. To get really moving, I needed a spark or something concrete to move forward. It came in a reply from an email that morning.

You see, while I had a lot of ideas swirling around about what the podcast and content would focus on, to this point I hadn’t actually formally approached anyone to be a guest on the as yet unnamed show. Something was holding me back. Maybe it was procrastination, fear, or both.

I had been (and still am) a huge fan of an Arsenal podcast called ‘Arsecast’ hosted by Andrew Mangan and on that Christmas Eve Eve, I found Andrew’s email address and sent him a very hopeful note. In between the part where I outlined my love for Arsenal and his work, I asked him if he’d be willing to be one of my first guests for this podcast idea I had.

Also, around this time, I was ramping up my coaching practice. Building up hours and experience. One of the most powerful questions you can ask when coaching a client, when they’re facing inertia or some sort of mental block, is ‘what’s the worst that can happen?’. It was this question that was in sharp focus when I hit sent on the email. Self-coaching can be harder to do than coaching someone else. So, overcoming the fear of a negative response, and being comfortable with a worst case scenario being no worse than things currently stood helped!

The next morning, just before hitting the road to drive home to Longford, the incoming email ping sounded on my phone. It was Andrew. He was onboard. In fact, he offered to record the interview in his studio in Dublin the next time I was in town.

As soon as I got over the fear and excitement of my first confirmed guest, I realised this now had become real. If I needed an incentive, which sometimes I do, this was it. The first real action was taken. The first steps forward. I had a guest to interview. Incremental progress. 1% better.

Looking back, I’m very grateful that it was Andrew I emailed first. Since then, I’ve emailed many others that never replied. In the podcast game, when you’re coming from a very low base (in my case a zero base), be prepared for a lot of non-responses. I would say expect it to be the norm. However, don’t lose heart, get clear on your objectives and keep pushing forward.

For me, the focus was the podcast. Taking the leap of faith and realizing the worst-case scenario isn’t really that bad after all was key and that there is potentially much more upside than down, if you get the reply you’re hoping for.

For you, the goal might be different. Tt could be a book, a blog, a date, a new job, a presentation, or whatever. However, the question should still be the same. Are you holding back in fear it may not work out?

Take a step back and think about what the worst case scenario really is? And then just hit send!