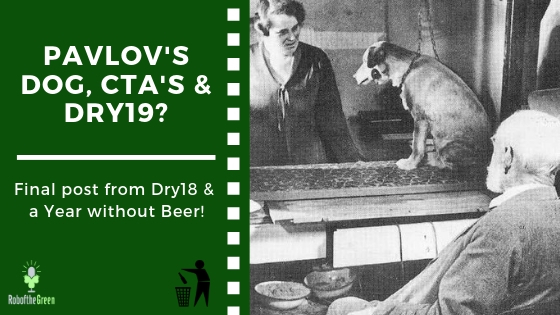 Right now, this very moment, as I write this, I’m fighting off a very strong temptation to begin this final piece of the Dry 2018 Post Series with an inspirational quote (from someone way more inspirational than me) with the key word ‘impossible.’ How else do articles start these days anyway? Especially ones that cover such a mammoth challenge as an Irish person giving up alcohol for a year.

A part of me really wants to go with the famous Mandela quote “it always seems impossible until it’s done.” Another part prefers the one from Audrey Hepburn “nothing is impossible, the word itself says “I’m possible”, and yet another tiny voice in me is championing one from a book I recently read by Yogananda Paramhansa with “nothing is impossible unless you think it is”. But no, I’m not going to go there. That would be way too predictable.

Why ‘impossible’? Well, 12 months ago, giving up drink for a full year did seem a little like that. Not just to me. Many that know me thought it too. And maybe a little bit outrageous. The Questions coming at me were “Why deprive yourself of it?” or “You work hard so why not have a few now and then?” followed by reassuring encouragement of “It’s not as if there was a problem with it. Enjoy it.”

To be fair, while I sensed deep down it wasn’t impossible, to go through a full calendar year without having any Alcohol was a bit daunting. Even if I had become a much more occasional drinker in the last number of years, giving up that glass of Red on a Friday night after a busy work week, or asking for diet Coke instead of a Beer when out for a Meal or at a work gathering was not going to be easy.

Thankfully, as the first few months flew by, I realized this task was far from unsurmountable. Like any Big Goal, if you chunk it up into smaller pieces, it becomes very manageable. So, an elaborate quote stating the ‘impossible’ doesn’t seem apt. As the year progressed, I noticed other words coming up that were more fitting. Words like ‘choice’, ‘options’, ‘simplicity’, ‘commitment’, and ‘freedom’.  By removing the choice, and making the commitment, the freedom came, and life became simpler. I’m still working on how to make that into a profound quote to inspire but maybe this could work:

Ok, not in the Mandela or Hepburn league but it’s one I’ve gone back to a number of times this year. I’ve noticed too that this approach can be applied to other Big Goals too.

So, as I finalize this post now, early in 2019 and reflect back, what are some big learnings that stand out?

Are you familiar with Pavlov’s Dog– the experiment that became famous over 100 years ago by Ivan Pavlov. He studied the behaviour of Dogs and developed a theory of classical conditioning. It explains how people associate two stimuli in their minds and react to one of them as though it was the other. Every time, after the right conditioning, Pavlov’s Dog heard a bell, it would salivate more expecting food.

For the longest time, when something momentous happened, something exciting, important, and worth celebrating, associating a few beers or a night out with it was the norm. Getting a promotion, completing a marathon, a holiday away, watching an Arsenal match, and so on. All would bring on a Pavlovian response within. Instead of salivating expecting food, it would be a signal to get the Beers in! I’d been conditioned that way.

During the year, one of the biggest ‘A-ha’s’ has been how this conditioning has begun to alter. I’ve been reprogramming myself to associate the excitement with a different response. Maybe that was to go for a nice meal, or to the cinema. Or do nothing at all and just enjoy the moment. It’s been an eye opener as I look back. Breaking habits can be tough, yet reconditioning is possible. Leading to a better outcome. And thankfully, no Dogs were harmed in this year-long experiment.

“You must feel great?” – asked by many all year!

My short answer is yes, absolutely, but not in ways you might expect. Physically, I’d feel ok a couple of days after a big night out. So that’s not been hugely noticeable. In fact, I’ve probably had more head colds this year than I’ve had in the last decade combined. The real improvements have been more Emotionally & Mentally.  Having zero hangovers during the year has been amazing. It allowed me to stick to my routine and get more done. It also allowed me to do nothing more often too. I haven’t created more time, I’ve just been able to put it to better use. The Inner Critic, my Gremlin in my head, that lovely voice that’s always been there to give me a hard time after a night out. Well, he’s had a bad year. A quieter one for sure. I now find myself having the ‘Fear’ (which was explained in a previous post here) only when I think about actually having the Fear!

I’ve often compared my life in my twenties, when my social life was full on, to a game of Snakes and Ladders (for those millennials, it was a physical board game popular a long time ago – forgive me if it still is). I’d manage to make great progress up the board, ladder by ladder, skilfully navigating the many snakes there to set me back. But always before too long, the snake’s charm would be too much to escape. The snake here would be the alcohol of course. Or maybe it’s that Gremlin again enticing me into places where it knew I’d regret later. Either way, it led to a fall. Back down the board. Setting me back. This year, while there have been temptations, I’ve managed to navigate my way up the board much more mindfully.

“I personally believe that the majority of people who have down moments in their lives, they can actually trace it back, quite often, to alcohol. Perhaps the only days of my life that I feel lethargic is instead of having two glasses at night time I had five or six”. – Richard Branson

I vividly recall hearing the above from Richard Branson in a podcast with Tim Ferriss in late 2017. It was around that time I was thinking about cutting out the booze totally and his words stayed with me since. As I reflect back on the years when I did drink, while alcohol been a catalyst for many great nights, I can relate to Sir Branson’s experiences. I’d safely say that 99% of the nights/days where I’ve felt very low have come very soon after alcohol. Combine that with a pre-disposition to overthinking, giving myself a hard time, and a lean towards anxiety and you have a dangerous mix.

Over the course of 2018, and none more so than in the last 8 weeks of the year, I’ve had to face tough times and deal with very real-life situations. It was difficult to look for positives, be optimistic, and try to reign in that very disruptive and over active critic in my mind. Difficult but manageable. I have no doubt, if I ever added a hangover to that mix, I’d have been in a different darker place altogether. So, from that perspective, my Mood, Emotional Agility and levels of Grit have improved this year thanks to less time on the rollercoaster that accompanies booze.