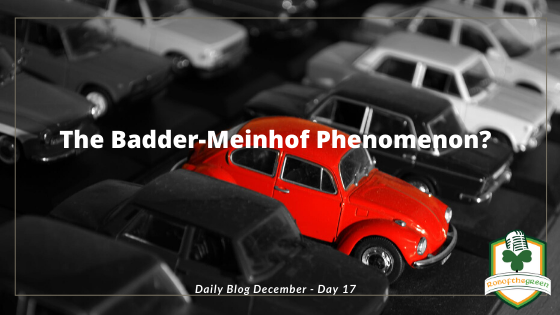 December 17, 2019 By rob.odonohue Comments Off on The Badder-Meinhof Phenomenon? Day 17

Folks, there is a piece I had 90% completed a while back and never got around to posting. So this morning became the time to do it! It’s another one that’s hopefully informative and a little different! Enjoy

“Life moves pretty fast. If you don’t stop and look around once in a while, you could miss it.” Ferriss Bueller

In every hour of every day, so many strange things (that’s the best word I can come up with right now) happen to every one of us that, if you took a few seconds to reflect on, are amazing. The complexity of all the systems that are around us and how they all work together, for the most part, without major destruction or malfunction, are incredible. Most of the time, if not all of it, we’re going so fast about our busy lives, that we never really take it all in and realize it. It’s phenomenal. I think, every now and them, we should take notice more!

Over the last few years, I’ve started working on my awareness. To become more aware and appreciative of the phenomenon’s that happen all the time. Not just phenomenon’s either. Simple things like language is one. How clichés became clichés. Are they really true? Etymology is another fascinating study. Where words get their origin and how they’ve changed. Feelings and happenings, like Déjà vu, really blow me away. That feeling you get when you realize it’s happening, and then, for that split second, try to control it so you know what’s going to happen next. But it never quite works out, and then it’s gone! The movie the Matrix always comes to mind when I think about Déjà vu. Its explanation seems to fit!

When writing another piece recently, I was trying to explain that feeling or ‘thing’ that happens when you start seeing something you never saw before, almost all the time. When you stumble upon something obscure or totally new, be it a piece of information, a new type of car, or maybe an actor you never saw before in the movie you just watched. No sooner have you become aware of whichever example you identify with, you start to encounter it again, and again, and again. The information pops up on everything you read, the car is literally everywhere on the road, and the actor, well they’re in every film, tv show and shampoo commercial there is. Well, it turns out there is a name for that. Or maybe a few. One is ‘the frequency illusion’. Another, with a little more interest in it is ‘the Badder-Meinhof Phenomenon’. I’ll detail out why two names in a bit but let’s understand what it’s all about first.

It’s explained as more of an illusion, so magic might not be too far off the mark. One of the descriptions I found is as follows: “the illusion in which a word, a name, or other thing that has recently come to one’s attention suddenly seems to appear with improbable frequency shortly afterwards.”

From my research on the topic, and what’s out there online (surprisingly a good bit about it), it would appear our brains are always on the lookout for patterns. They have a bias toward them. Not just any type of patterns either. But ones that it hasn’t seen before. They tend to ignore ones that it’s familiar with for the most part. We tend to like hearing or seeing new things.

When we hear a word or name which we just learned the previous day, it often feels like more than a mere coincidence. This is because Baader-Meinhof is amplified by the recency effect, a cognitive bias that inflates the importance of recent stimuli or observations. This increases the chances of being more aware of the subject when we encounter it again in the near future.

For something that’s been happening to us, I’d imagine since the dawn of time, or for as long as new objects, people, or information started to appear, I’m amazed that it’s only been labelled in the last few decades.

It’s documented that Stanford linguistics professor Arnold Zwicky coined the former term in 2006 to describe the syndrome (seems like a strong word for it). It’s caused, he wrote, by two psychological processes. The first, selective attention, kicks in when you’re struck by a new word, thing, or idea; after that, you unconsciously keep an eye out for it, and as a result find it surprisingly often. The second process, confirmation bias, reassures you that each sighting is further proof of your impression that the thing has gained overnight omnipresence. While this is more commonly accepted now, Zwicky didn’t coin that term until 2006, over a decade after “Baader-Meinhof” was coined.

Now if you’ve done a general search for Baader-Meinhof, you might be a little confused, because the phenomenon isn’t named for the linguist that researched it, or anything sensible like that. Instead, it’s named from a militant West German terrorist group, active in the 1970s. The St. Paul Minnesota Pioneer Press online commenting board was the unlikely source of the name. In 1994, a commenter called the frequency illusion “the Baader-Meinhof phenomenon” after randomly hearing two references to Baader-Meinhof within 24 hours. The phenomenon has nothing to do with the gang, in other words. Strange but it’s how it got the name. God knows what else he could have named it if he had heard something else twice in 24 hours in the mid-90s.