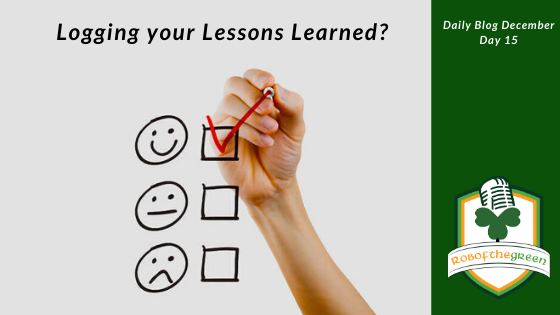 December 15, 2019 By rob.odonohue Comments Off on Logging your Lessons Learned – Day 15

The Irish Sports awards were on TV last night, honouring the best individuals and teams from the country. Another year where Irish sports people punched above their weight (pun completely intended there for Katie Taylor) on a global scale. Nobody could deny Shane Lowry the main award. What an honest, humble and ‘open’ (pun intended again) guy he comes across as.

As I watched it, one interesting pattern emerged from many of the interviews. The giant role past failures played in a future success in the individuals’ careers. Most notably with Lowry talking about the lessons he learned from falling off the pace at a previous major a few years earlier. By consciously taking the time to reflect on and improve from this previous collapse made him much more prepared and in control for the win at Royal Portrush.

Similarly, in the world of project management, keeping an ongoing lesson learned log can be invaluable as you work through issues, and challenges during the life of a project. All too often however, this simple artefact gets deprioritized in the busyness of getting things done, and only comes into focus at the end of a project (if at all). By then, with so much water under the bridge, it’s difficult to recall all the useful insights that could be used to speed up delivery on the next initiative. If the practice isn’t implemented in real-time and documented, it will likely get lost, and with it the lesson.

Lessons learned logs aren’t just for elite sports people or busy project managers. They can be very useful in your own personal and work life. In 1-1 coaching, almost without fail, clients are overly keen to move onto the next goal, project, or task. They see taking some time out to reflect on what’s just been completed, thinking and feeling into it a little bit more, and seeing what could have been done differently or what the lesson learned was, as time wasted. When the complete opposite is true.

The ROI you gain from a personal lesson learned journal is significant. Just from creating a simple journal, spreadsheet, trello board, or even voice memo on your phone, and spending 5 minutes daily, to capture what you learned today that could be useful tomorrow or at some time in the future, is powerful and simple.

If you do, over time, you’ll see patterns emerge highlighting bad habits, procrastination, inefficiencies, and more.

Some of the best and most transformative coaching tips and tools are the simplest. I’ve found this to be the case with personal lessons learned logs. But like most of coaching approaches, they are only powerful if you apply some discipline, take action, and just get started.

Check out the full list of Daily Blog December posts on www.robofthegreen.ie/blog

Sign up to the 1% Better Slack Community and take on a January 2020 challenge HERE!