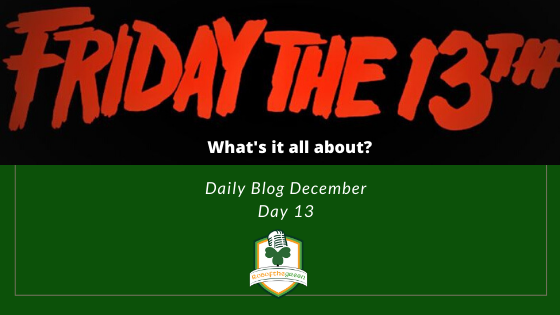 For as long as I can remember, Friday the 13th has been this superstitious day that bring with it, potentially, bad luck. But why do we all seem to care?

Even in the last week, I’ve heard friends & colleagues talk about something they’re planning to do this Friday, then realise that it’s Friday the 13th, and follow up by saying maybe that’s a bad day to do it. Grown adults from different parts of the world actually said this.

I’m a naturally curious person yet never have given this much thought before. What is it about this day of all days that makes us that little bit more (or a lot more in some cases) apprehensive?

So, for today’s daily blog, I decided to do a quick bit of googling to see what I can find and share with you. To at least give you some facts or history about this spooky day! Here’s what I found. Enjoy!

So, as you dive into Friday the 13th, and do everything you can to avoid walking under a ladder, breaking a mirror, or opening an umbrella indoors, know that it’s probably just as valid to be in fear of Monday the 16th or Sunday the 29th as it is today.

That being said, as I read twitter this morning, and see the election results in the UK, maybe there is something terribly scary about today after all.

Have a safe & lovely Friday!